Solvent or water based stone sealers?

Solvent based stone sealers are absorbed deeper into the stone BUT deeper isn't always better. They have a very strong odor and are trickier to apply. There have been a few reports of solvent based sealers reacting negatively to stones that have a factory applied resin.

A water based sealer doesn't absorb as deep as a solvent based sealer but this is good. It means the sealer is sitting just beneath the surface of your stone preventing any liquids from absorbing in.

Water based stone sealers are easier to apply and safer to handle as well as safer for the environment.

It's always a good idea to test a scrap or small out of the way area first regardless of the sealer you're using.

Does it repel water, repel oil, or resist oil?

Not all stone sealers work the same.

Some sealers just repel water. These are called Hydrophobic. A hydrophobic type sealer repels water based liquids such as coffee, soda, and tea. It's easy to remember because it starts with hydro - as in water.

Is there a difference?

YES! Oil resistant sealers slow down the absorption of oil into the stone whereas an oil repellent sealer prevents oil from entering the stone.

How often does the sealer need to be applied?

Some sealers need to applied every year, some every 3- 5 years, and others
TEN Years Plus. This will depend on the type of resin used. The type of resin used (as well as the percentage used) is the most important factor because this resin is left behind to do the work.

Natural Resins - Linseed Oil would be an example of a natural resin. It's effective but has the tendency to yellow.

Silicon Resins - This is the least expensive type of resin used. It evaporates quickly and is the first to lose its effectiveness. Silicon resins were the first to come to the market, but only a few manufacturers still use them.

Silicone evaporates and needs to be reapplied more frequently than any other impregnator. Furthermore, silicone based sealers are mainly solvent carried and while usually excellent water repellents (while they last) they are only fair oil repellents.

Siloxane Resins - Silane and siloxane based impregnators are the next step up. These naturally deteriorate over time. But, they cure better and do last longer (up to 5 years), opposed to 1 to 3 years. They're also mainly solvent carried and are still better at repelling water than oil.

However, its sealing performance is limited to a certain range of stones which makes its application somehow limited.

These sealers cover a greater range of applications and are the most consistent over time. It won't evaporate like silicon nor will it go through any other type of natural deterioration like siloxane does.

The advantages of these resins is that they can be carried by water, opposed to hazardous solvents, and they are better at repelling oil than water.

The difference in price of the various makes is mainly determined by two factors:

The initial cost may be higher but you SAVE time and money!
Quality product = fewer headaches + less frequent applications = Happy YOU!

Your Guide To Stone & Granite Care 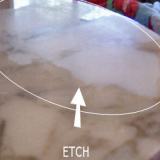 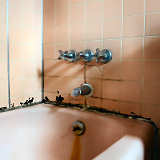 Get Rid of Mold & Mildew 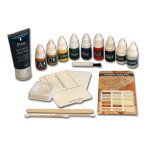